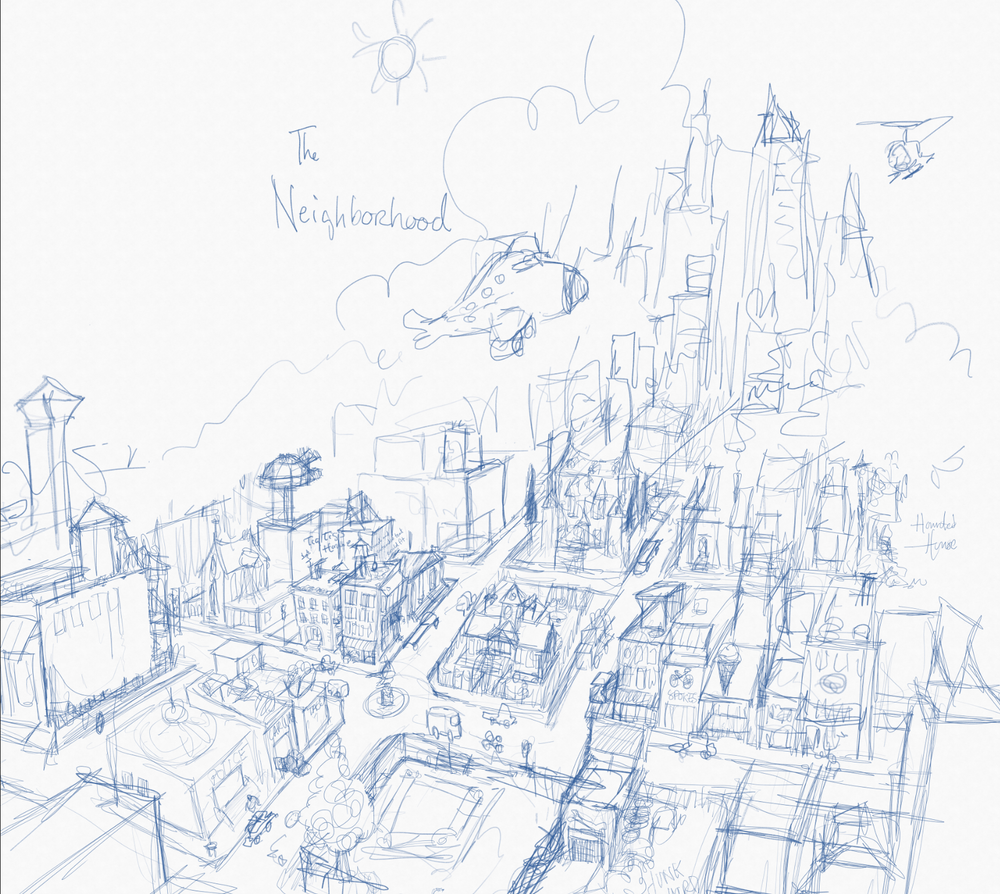 I, more often then not, like to work on a small scale. I don't entertain doing murals or side of building kind of works because it is overwhelming to me... to think of creating beyond the bounds of a sheet of paper. now its not that I don't work BIG at times... but it always scares me.

In creating this next book, I have the basics nailed down and where I'm headed established. But it was pointed out to me by my wife that I'm too in the minutia. If indeed I wanted to take a page from the brilliance of Richard Scarry, what did he do?

She was referring of course to Richard Scarry's 'scenes' or building cross sections (where you could see inside the building and all that was scurrying about inside.) She said I should do the same... show the WHOLE NEIGHBORHOOD. This scared me as I think of the magnitude of this... but then, I realized she was completely right. Instead of building 'drama' in my story and keeping the 'drama' going, don't worry about that too much, bring reprieve with unique scenes that bring in the 'whole' and give more then what the story may be about in this moment. So, I'm having to purposely pull back from the minutia and 'go big'.

The scene shown here is Tig's new neighborhood. This is before we bring in all the characters... its the rough. You'll see Tig's apartment, the school and all the neighborhood shops and services. This is the early rendering from what I'm working from.

It is interesting, but every book I've done, I often think of the setting as the STAGE. In my first book, The Farmer, you'd notice that every camera angle you see the illustration through is consistent with the Farmer's home, inside and out and his garden alongside the creek... even where his neighbor's house is... all there. - The Grump book I expanded the stage to include his house on the other side of Walloco Woods and the town of Dinkerwink. Even The Flower Man, you'll see the street and house that the book mainly revolves around in earlier illustration - but from afar. I apparently like this kind of thing. In fact I always loved MAPS.

So, this is my map that I can't wait to fill out showing Tig's world.