JUST GET ME THE GAME!! 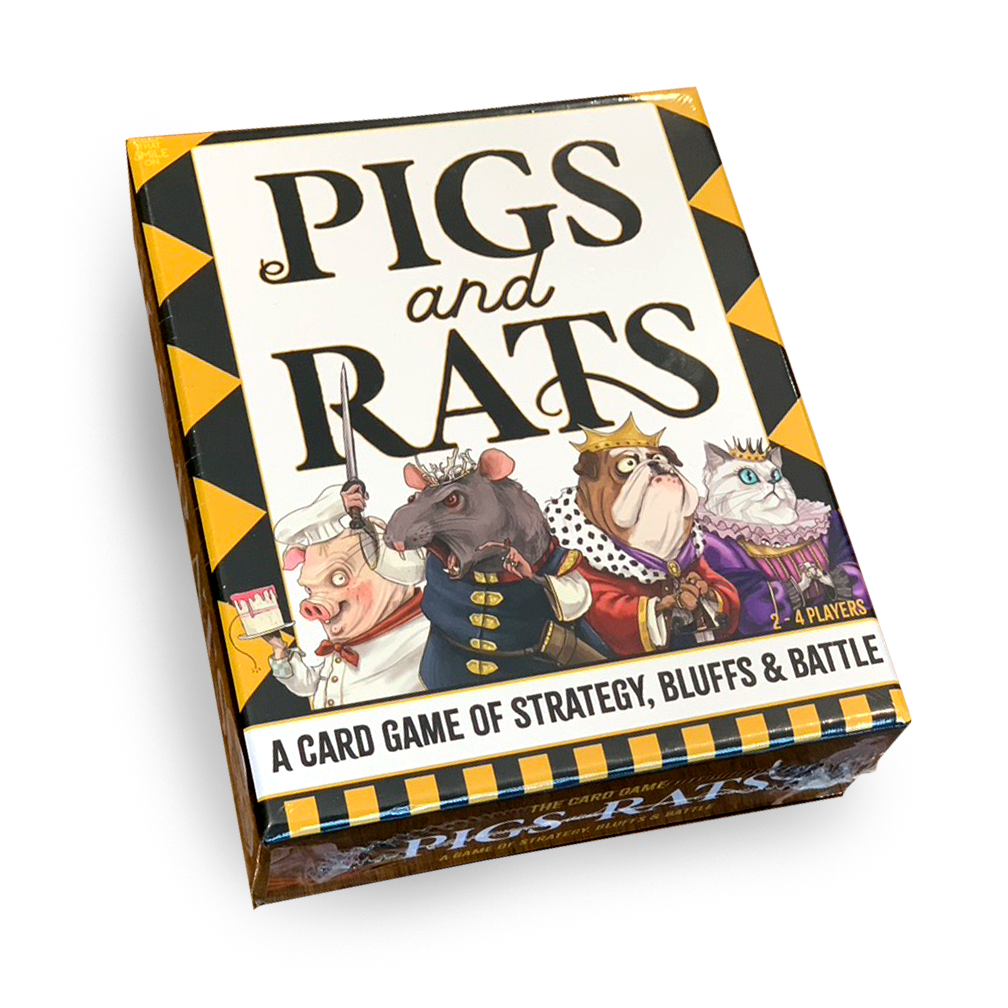 'Pigs and Rats' has everything you want in a good card game - strategy, bluffs and battle. The game is composed of rounds and each round has 3 parts - the RISK, the MELD and BATTLE!

A game for the ages! Quick to learn but a lifetime to master. Play with 2 to 4 players in single play or discover the joy of team play with 4 players. Also, be sure to learn the fun game 'Oh Rats!' you can play with this game deck.

Packaged and designed by artist, Mark Ludy, believing you, your family and your friends will love it and have years of enjoyment from playing it.

OBJECT: Whoever gets 1,500 Points first or, optional for possible shorter play, has highest score after 5 rounds if below 1,500 points. The score booklet provides both options.

DEAL: Draw random card from deck with highest card determining who the starting dealer will be. The dealer switches clockwise between players every round. Shuffle the cards twice then deal the following:

When Playing 2 PLAYERS: Deal 5 cards to each player and put two cards facedown for the Bounty. The un-dealt deck is placed down between players. Player opposite dealer will be drawing 2 cards, but one at a time. The first card drawn they can choose to keep or risk that the next card would be better for their hand. If they discard the first card, they must keep the second. If they keep first card they can look at second card but it must be discarded (starting a discard pile next to the draw pile.) Next player does the same. Your playing hand is thus assembled till the un-dealt deck has no cards left. The discarded cards will be pushed aside out of play and not counted for rest of round. After all cards have been picked and discarded, players should have 14 cards a piece.

When Playing 3 PLAYERS: Place three cards to the side as the Bounty and then deal in bunches of 3 to each player till all the cards are dealt. Each player should have 15 cards a piece.

When Playing 4 PLAYERS: This involves having teammates who will sit directly across from each other separated by opposing player. The cards are dealt in bunches of 3 at a time to each player till all the cards have been dealt. (You can play individually 4 player too - the Bounty will be 4 cards - see playing 2 or 3 players and just adapt to 4)

THE RISK: The RISK is the amount of points one is betting they can get by rounds end. IF the Risk amount is not made by round’s end - the Risk Taker or their team, go minus the amount of the Risk.

When betting on the Risk, it is done in 10 point increments. Player to the left of dealer starts. They have three choices:

2. ‘Pass’ - which means they don’t wish to bet on the Risk and can no longer bet.

3. ‘Call a Throw-In’ - which means you are wanting a re-deal as you don’t like your hand. If all players call a throw-in then cards are re-shuffled and round starts over. If you call a Throw-In but the other player Opens the RISK - you can still Bet or Pass.

Once a player Opens the RISK, then opponents can either raise the bid in increments of 10 or Pass. When a player has won the RISK, that amount is recorded on the score sheet. Hereafter for the round they are referred to as the RISK TAKER.

HIGH SUIT: The playing cards are separated into four suits - Pigs, Rats, Dogs and Cats. The Risk Taker now gets to select one of the suits for the round to become the ‘HIGH SUIT’. Any card in that ‘High Suit’ can beat any other card in other suits. It also allows for certain card combinations that are worth points. High suit is recorded for reference on the score sheet.

BOUNTY: The Risk taker gets the added bonus of extra cards known as the Bounty.

When Playing 2 or 3 PLAYERS: Risk Taker turns over the Bounty cards placed there during the deal for all to see before taking them into their hand. The Risk Taker chooses the same amount of cards to discard. These discarded cards are placed to the side where their tricks won in Battle will go. Any pointers in the discarded cards at rounds end will count toward their score.

MELD: Players now place down in front of them all the card combinations that are worth points in their hand. (See ‘Possible Point Combinations’ on back or you can reference the playing card with that same information.) All points made through card combinations are tallied and put on score card. After scores are recorded players pick up their cards and get ready for Battle.

DECISION POINT: Risk Taker before going into Battle can choose to withdraw in defeat if they don’t believe they can get the RISK amount at round’s end. In such a case, the Risk Taker will go minus the Risk amount but the opponents will get their entire Meld made. This closes the round. Or they can go on, now knowing how many more points they need to get the Risk amount.

BATTLE: Risk Taker leads in Battle. They choose any one card from their hand to lead with. Player opposite MUST follow suit (example: if Pig Suit is played - following players must play a Pig Suit if they have it), and if player can beat the highest card already played they MUST. If you don’t have the suit you can play whatever you want. If player plays identical card as one first laid down, then the first one played wins. The player with the winning card takes all the played cards and trurns it over in pile next to them - this is called a Trick. Winner of the trick leads out with any card of their choice and play follows till the last trick is taken.

POINTERS: A pointer is any KING, QUEEN or PRIEST (marked with a star on their banner). Players now count through their tricks seeing how many pointers they took in Battle. Each pointer is worth 10 points each. The last trick taken is also worth 10 points. In every complete deck of Pigs and Rats there are 48 cards with 24 of them being pointers. Points are recorded on score sheet.

THE TALLEY: On the score sheet, the Meld and the Battle are added together. The Risk Taker’s tallied points must equal that of the Risk or be more to be successful in the round. That final tallied amount is their score for the round. If their score is less, then that player goes minus the amount of the Risk for that round. Other players or teams figure their round’s score by adding their Meld and Battle points to determine their round’s score. IF a player or team did not take a trick in battle they lose all the points they made in their Meld and get zero points for the round.

Play continues round to round until player or team gets 1,500 points or (optional for possibly shorter play) whoever has the high score after 5 rounds if not having reached 1,500 points. 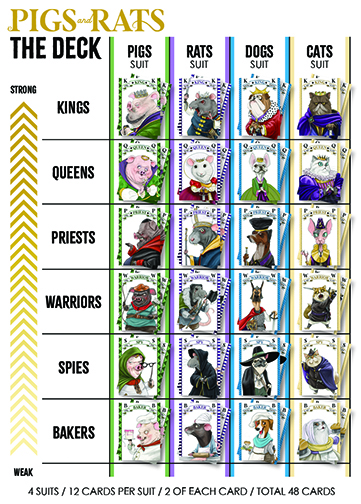 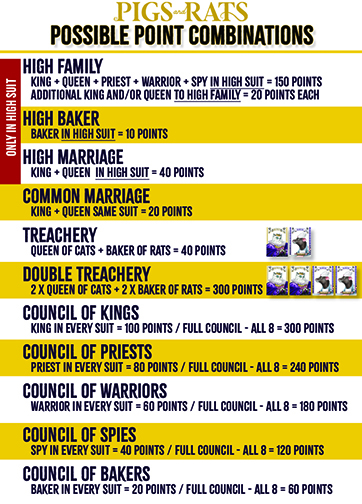 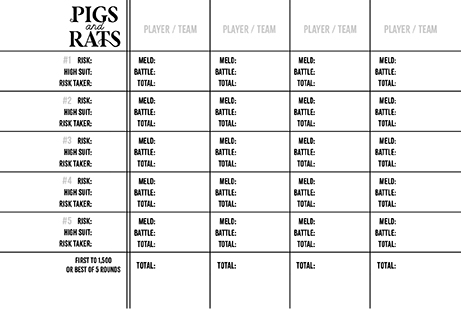